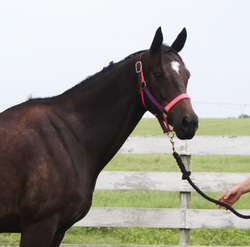 Raven was purchased from KMR Farm in 2013 to be trained for the hunt field.  She took to foxhunting like a duck to water, happily keeping up with first flight on her first trip out, then whipping-in her second hunt and not looking back from there.  She completed the 2013 hunt season as a fairly solid whip horse, then was given some well deserved time off.

In February 2014, she went to her first jumper show and fit in with the hustle and bustle like a seasoned pro! Took naps at the railing while waiting for her rounds, and even placed in one of her classes.  She went back into the hunt field for the beginning of the 2014 season with Independence Foxhounds, only to have her season cut short due to a minor knee injury (ask for details).

Currently sound, though a PPE is recommended, and selling as a prospect for Jumpers, Dressage, Trail Riding, or Foxhunting (with an experience rider, get's excitable in the field).  She stands great for clipping, though needs a Blocker Tie Ring when being tied, good to pony with, trailer loads well, but prefers to travel in company. Raven has been barefoot since 2014, only wearing her Renegade boots for trail riding along rocky footing.

Suitable for an experienced rider, or advanced beginner with trainer supervision.  She is not currently in shape, so she needs a refresher course before beginning serious work.
*Note: the videos above were taken straight from the pasture, having not been ridden in several months.